There are many websites and articles on exercise throughout pregnancy, which I did look over for personal information and gain more knowledge. But I can only speak through my experiences through both pregnancies and how I was previously active before, which does make a different how you can train.
For me in the first trimester the biggest challenge was fighting off fatigue in my first pregnancy and headaches and morning sickness in my second. There would be days or even weeks I couldn't face the gym, but it did pass. Incorporate a walk within your daily routine would substitute the days

*The occasions I did manage to exercise I felt a million times better and it did  help increase my energy levels and minimize many pregnancy discomforts.

*A tip I discovered to ease the nauseous I ate a small snack within the hour before I started any form of exercise.

My main focus was to keep my strength, stability and overall fitness. Continue with what you had been previously doing and amend where necessary.

If you are at a gym or looking for the support of a personal trainer, I would advise you seek a professional who has pre and post natal experience.

Most important thing to remember when your exercising for two, is especially important to warm up. When working out, going from zero to 100 is never a good idea. It's especially not a good idea when you're pregnant. "The ability for your vascular system to react quickly is not the same as it normally is," says Geralyn Coopersmith, Director of the Equinox Fitness Training Institute. Therefore, you need to give your body at least 10-15 minutes to warm up before performing any exercise. If you are still comfortable running then a gentle jog is great. I preferred the cross trainer as I found running uncomfortable. Mobility exercise are a great way of warming the body up too.

Plan a simple workout: If you are a non-exerciser start with brisk walking or take up a prenatal yoga class under supervision of a certified instructor. If you have previously been active, continue with adaptations. Seek professional advice
Be regular with workouts: Always make it a point to spend at least 30 minutes working out during the initial months, do something you feel comfortable doing. Intensity can be gradually built up. You can still challenge yourself with exercise.
Warm-up: Always warm-up before you start to exercise, either walk on treadmill at a slow pace if you are doing weights at gym or go for a stroll in the park to prepare your body for exercise. Remember to wind down and stretch too post exercise.

In another Blog I will talk about my training schedule and the exercise that are do's and donts.
Posted by MamaActive at 14:04 No comments:

I thought it would be a good time to talk about what I am all about and my experience and vision for the future.

I am a mother of 2 beautiful girls a 4 year old and 7 month old.

I have always been very active since a child. I competed in swimming for county from a very young age, so became exposed to strength and condition from the age of 12. Athletics at school brought out my natural talent for long distance running. I began competing in County level for cross country and track athletics. This grew into competing in biathlons,  where I came 3rd in the British Schools.

As I grew out of my teens I found a passion for the gym which I've continued to this day. In my early twenties, I then began running again while living in London and competed in a few road races. I also discovered Ashtanga yoga, which I did twice a week.

When I moved up to Scotland I continued long distance running and obtained some fantastic times in my 10km and half marathon distance.
I turned 30 and was physically looking for a new challenge and started kick boxing. My fitness excelled and my body shape changed and really toned up.
I began competing and did really well in the short time I was in this sport. I achieved Scottish Champion 2 years in a row and silver in the English championships. This then opened eyes to try boxing and thai boxing. This is where I met my partner. I also found all these sports very sociable and found life long friends while training.

I was completing my fitness instructor course when I fell pregnant. I was probably at the peak of my fitness and I continued to train until 38 weeks pregnant. Returned to post pregnancy weight by 6 months postpartum. For my second baby I also trained but very differently and got back to post baby weight within 6 months again. This is where my passion began ... 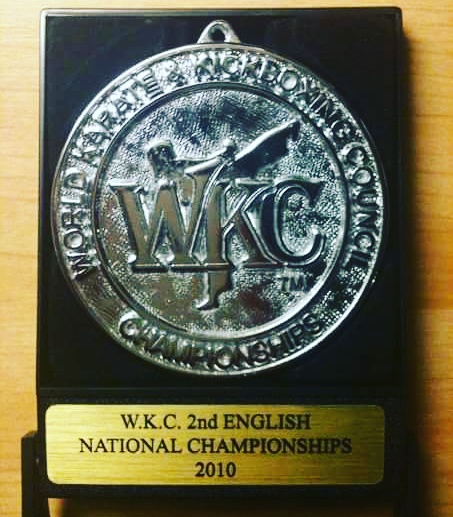 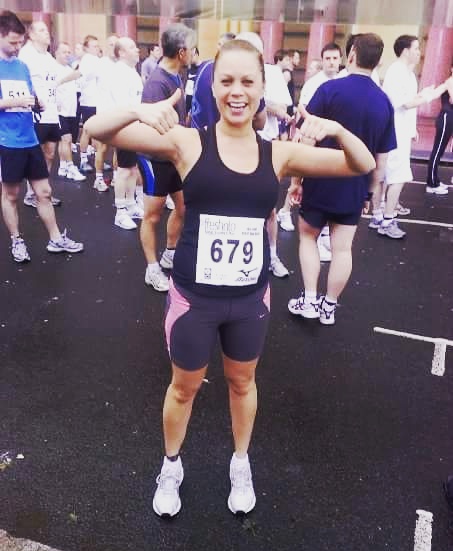 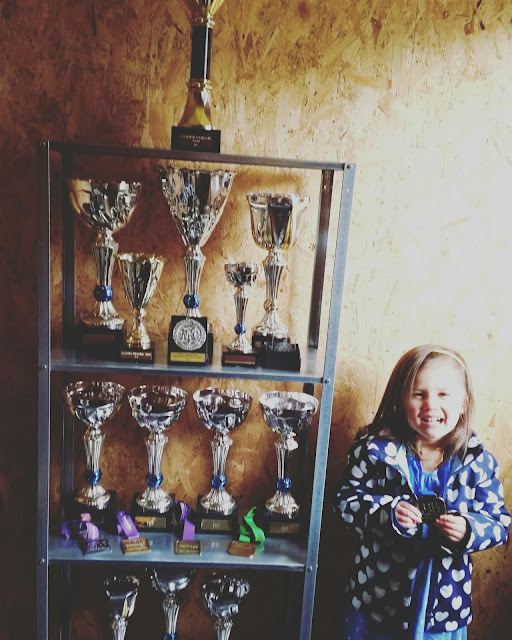 Posted by MamaActive at 12:43 No comments:

The Revolutionary New Science of Exercise and the Brain
Posted by MamaActive at 12:56 No comments:

So I have been experiencing twinges in my front pelvis, predominantly when I'm walking and using the stairs. I also notice swelling on one side of my pubic area. Exercising wasn't causing me any bother to my pelvis but I am not sure if this is because my joints and body are more warm. Luckily I recently started a static desk job because the role I was previously doing involved being active all day. So  I decided to mention it to my midwife on a routine visit and she referred me to the hospital physio. I was lucky and managed to get an appointment within a week.

So after the initial consultation with the physiotherapist, it was concluded that I had unfortunately got SPD. Yes, it is as painful as the name sounds Symphysis Pubis Dysfunction.This apparently more common in second pregnancies and can effect 1 in 5 pregnancies.

SPD is also known as pregnancy-related pelvic girdle pain PPGP, which is a variety of  uncomfortable symptoms caused by misalignment or stiffness in the pelvic area. This leads to instability in the pelvic joint allowing it to move in ways it was never intended to move. The condition is not harmful to the baby but painful for the mother SPD is not only painful, but it also puts a damper on workouts during and after pregnancy.

So I had the pain across the front and obvious swelling on one side, the physiotherapist said my pelvis had actually dropped about 2 inches on one side. This was quite frightening to hear but actually easy to fix. The physiotherapist positioned me where my leg was over her shoulder and I had to push against her while she pushed my pelvis. So after about 30 seconds the pelvis had been corrected and back in line. It was now down to me to maintain this and was given a beautiful NHS support band to wear. The band was very tight so only could realistically wear it when I was walking and standing. It did help taking the weight off my pelvis and continued using this while walking.


The Association for Chartered Physiotherapists in Women’s Health (ACPWH) also offers this advice: 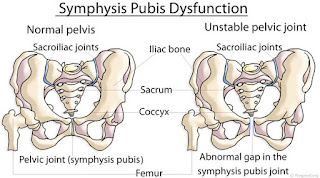 So after resting for a few days and getting used to the rather large NHS pelvic support band I headed back to the gym. I talked everything through with the personal trainer and had told him that I did have the all clear to exercise. The conditions were, don't do anything that hurts or uncomfortable, no plyometric or single sided exercises. Split squats, lunges, step ups, pistol squats and lateral jumps would leave me in agony.
So the focuses for us to avoid when rewriting a revised program were exercises that involved

The first adaptation was to isolate the pelvis, previously I was using stability ball while lifting weight and cable machines. This was so that my core was engaged and I could work on pelvic tilt in between sets (recommended by the physio). Alternatively now I am using a fixed weights bench.

I am avoiding
I still want to achieve an all over body work and still want birth preparation to be a focus. To work my legs I am using the seated leg press as my weight load is off my legs and my pelvis is supported. I have been using the seated cable machines to focus on shoulders, core, upper back and arms. Using dumbbells (both hands) while seated on a weight bench enabled me to isolate the delts and lats. I also did an elevated plank on the weight bench to ensure I was maintaining a tight transverse muscle that will help support the baby weight. I did not wear the NHS support band while training, it as too restricting so I wore my own support to keep the baby weight off my pelvis.

At this point in my pregnancy I decided to stop the functional training class I had been attending up to now. Since falling pregnant I had been coming at least once a week and working on my own adaptations within each circuit. I have now decided to focus on birth and post birth preparation in the gym.

So the initial troublesome pain began to fade away and I was no longer taking painkillers and I gradually introduced my original programme back into my training. 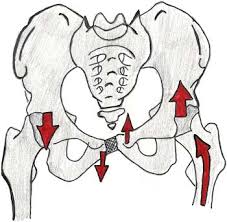 Posted by MamaActive at 12:36 No comments:

MamaActive
I am a mother of 2 beautiful girls, Layla-Rose and Ruby Florence. As all mothers would agree, children change your life and opened doors to a whole new outlook and way of living life. This blog is about my journey of motherhood, lifestyle and fitness. Before having my first daughter, I qualified as a fitness instructor. With this knowledge and my personal experience, I have complied research and tips on being physically and mentally the best throughout pregnancy and postpartum. Initially this Blog was my research I personally found and practiced within my fitness routine with the support of a P.T with the relevant qualification. Since then I have become a qualified pre and postnatal fitness coach and studying my advanced CPD.